Objectives:
Our research aims to develop farther the non-invasive precision apiculture systems based on multiple sensors indented at early warning indicators as well as at predicting bee behaviours by focusing on sounds. The specific objectives are (1) the monitoring and multi sensors’ recordings from hives in various climates (Cold semi-arid, Hot semi-arid and Hot-summer Mediterranean climate) and landscapes (agricultural, urban and semi-natural areas); (2) the correlation between sound, atmospheric and weight sensors with traditional field monitoring methods on predicting winter and summer honeybee behaviours; (3) the assessment of colony mortality risk; (4) the recording of the defensive behavior against predators.

Sensors to be used:
• Internal temperature and humidity. This will consist of a grid of sensors that will display a three-dimensional display of bee locations and colony size within the hive.
• Audio. A series of microphones with various sensitivities will be installed on the central frames of the hives to record frequencies ranging between 18Hz and 18000Hz.
• Scales. Weight sensors will be installed on all colonies.
• Optics. A thermal camera will be available for further analysis.

All sensors will be connected to microcontrollers and the data will be transferred to an information gateway using a communication protocol that has no known effect on bee behavior. 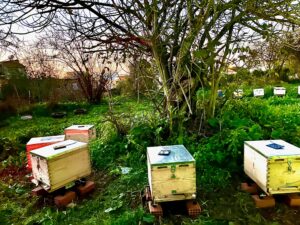 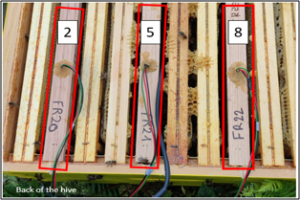 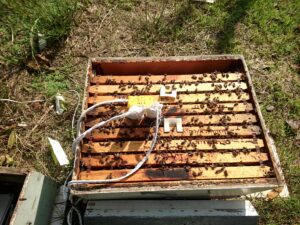 Expected results:
• Enhancement of fundamental knowledge on the behavior of bees and the internal function of the hive
• Better understanding of the macro-organism’s response to threats such as parasites, predators, weather conditions and swarming indicators.
• Comparative study of the development of bee colonies in varies ecosystems
• Preparation for the developmentof machine learning models for possible early warning notifications of these threats.
• Creation of low-cost precision non-invasive beekeeping tools for easy hive monitoring
• Correlation of invasive and non-invasive censoring systems